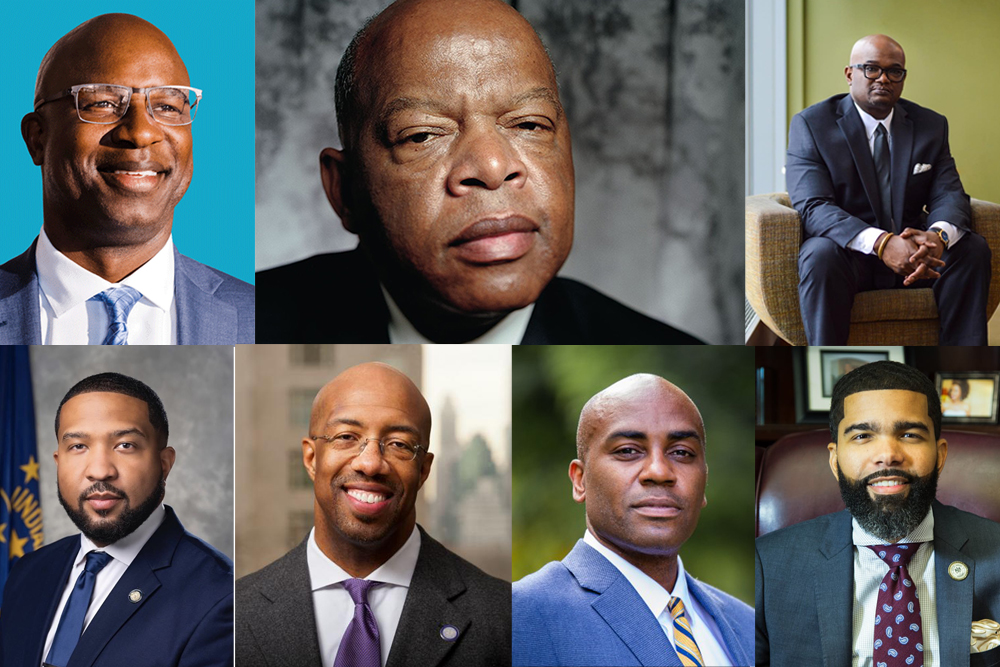 Congressman Jamaal Bowman founded Cornerstone Academy for Social Action, a Bronx middle school focused on unlocking the natural brilliance of all children through a holistic curriculum, where he served as principal for a decade. He worked to ensure advanced student involvement in science, technology, engineering, art, and math. Bowman was elected to US House of Representatives in November 2020, running on a platform of transformative progressive policies that will improve the lives of those who have been legislated out of the American dream.

Before he became a congressman, John Lewis was the leader of SNCC (Student Non-Violence Coordinating Committee) from 1963-1966. John Lewis put his safety on the line to advocate for equal rights; from the Freedom Rides to Bloody Sunday -Selma to Freedom Summer.  So often on the front line during protests, Lewis’s skull was fractured during the voting rights march in Selma, Alabama. He continued to fight for the rights of people leading to he election in 1981 to the Atlanta City Council.  John Lewis ran and was elected to U.S. Congress in 1986, Congressman Lewis was known as “the conscience of U.S. Congress.”

Dr. Christopher A. House is a communication expert, thought-leader, visionary, author, communication studies professor and a pastor. He is an educator and diversity professional with expertise in matters and practices of diversity, equity & inclusion, inclusive excellence, and communication & culture. Currently, Dr. House is an associate professor of Communication Studies at Ithaca College.

Eddie Melton was elected as State Senator for Indiana’s 3rd District in November 2016. In addition to serving in the Indiana Senate as Assistant Minority Leader. When not in session, Senator Melton serves as the manager of Corporate Citizen and Community Relations for Northern Indiana Public Service Company (NIPSCO). Prior to joining NIPSCO, Melton worked as the Community Initiative Officer for the Legacy Foundation, Lake County’s community foundation in Northwest Indiana. Melton has served as chairman of the Indiana Commission on the Social Status of Black Males, has served on the State Board of Education, representing the First Congressional District of Indiana and has also served as a national board member for the American Association of Blacks in Energy (AABE).

Michael Sorrell is the longest-serving President in the 146-year history of Paul Quinn College. Under his leadership, Paul Quinn has become nationally renowned for its innovative approach of using higher education to address the most persistent and pressing problems of society. Just one the school’s numerous accomplishments during President Sorrell’s eleven-year tenure have been the demolishing 15 abandoned campus buildings; partnering with PepsiCo to transform the football field into the “WE over Me Farm”. He is the only two-time recipient of the HBCU Male President of the Year Award in history (2016 and 2012) and has been nominated a record six times. The Washington Monthly named President Sorrell one of America’s 10 Most Innovative College Presidents.

Ernest Morrell is the Coyle Professor, a member of the faculty in the English, and Africana Studies Departments and Director of the Center for Literacy Education at the University of Notre Dame. Ernest is also director of the National Council of Teachers of English (NCTE) James R. Squire Office for Policy Research in the English Language Arts. From 2015-2021 Ernest has been annually ranked among the top university-based education scholars in the RHSU Edu-Scholar Public Influence Rankings published by EdWeek.

Chokwe Antar Lumumba is the current mayor of the City of Jackson, Mississippi. Mayor Lumumba was 34 years old, making him the youngest mayor in Jackson’s history.  He is an attorney, a husband, a father, and the son of two life-long community activists—the late Mayor Chokwe Lumumba and Nubia Lumumba. Mayor Lumumba earned his Juris Doctorate and a certificate in sports and entertainment law from Thurgood Marshall School of Law at Texas Southern University in Houston. After law school, he immediately returned to Jackson, Mississippi to serve with his late father, former Mayor Chokwe Lumumba at Lumumba, Freelon, and Associates. In 2013, he launched his own firm—Lumumba and Associates—a firm “Dedicated to Community. Invested in Justice.”

Previous WHEN A KNEE BECOMES A NOOSE by Dr. Anthony Neal
Next Brotha Magazine’s 50 Most Influential Men of the Year – Part 2