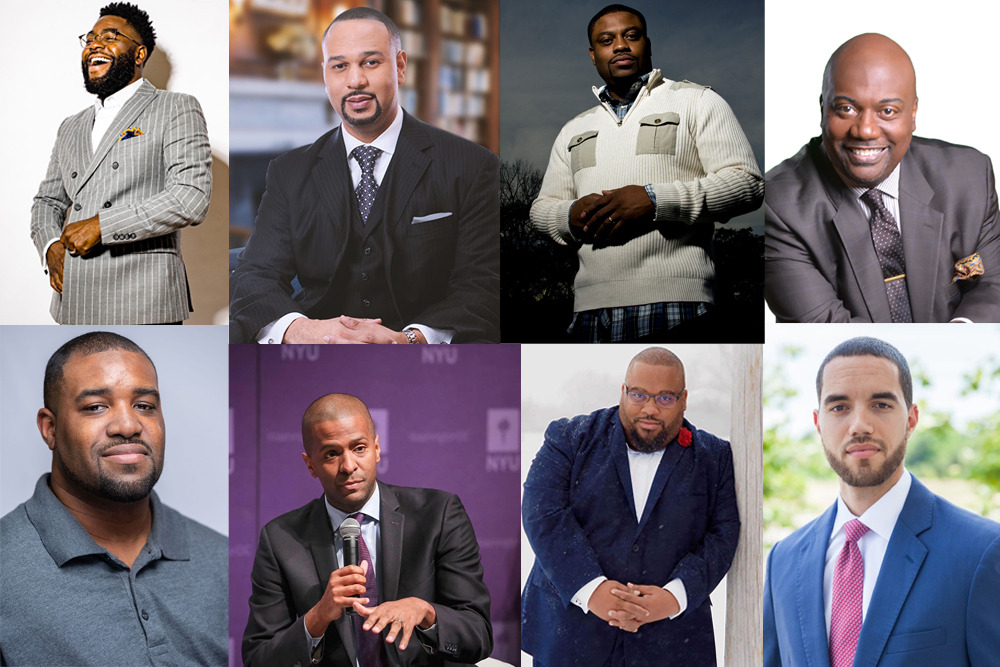 Representative Brandon L. McGee Jr., community activist and architect of social solutions for the people of Connecticut, is serving his fourth term representing areas of Windsor and Hartford. He also serves as a marketing and communications coordinator for the Capitol Region Education Council in Hartford. A Hartford native, Brandon devoted his life to public service early in his career after being inspired by Mrs. Rosa Parks, one of the most influential figures of the civil rights movement, whom he considered a friend and mentor. He is an advocate for equity in education, criminal justice reform, voter registration and empowerment for people of color and their communities.

Carlos Moore is the Managing Partner of The Cochran Firm – Mississippi Delta located in Grenada, Mississippi.  He has been a trial lawyer for seventeen years focusing on complex litigation involving civil rights, police brutality, catastrophic personal injury, wrongful death, premises liability, worker’s compensation, social security disability, criminal defense, and nursing home negligence.  He has handled hundreds of litigated matters before state courts, federal courts, and administrative agencies in both Mississippi and Tennessee where he is licensed to practice law. Currently Mr. Moore is a municipal judge and president-elect of the National Bar Association for 2021.

Dr. Mark Williams is a board‐certified Otolaryngologist (Ear, Nose & Throat Physician) who recently relocated to Nashville, TN where he opened his surgical practice, Ear, Nose & Throat Specialists of Nashville. In addition to his establishing his private surgical practice on the campus of Southern Hills Medical Center, he is also an adjunct assistant professor at Meharry Medical College and founded the Voice Care Center of Nashville, where he specializes in treating and preventing voice problems in Christian and Gospel music artists. As an independent gospel recording artist himself, Dr. Williams has a keen insight to not only the medical and surgical implications of voice disturbances, but also the many spiritual impacts. He is also the author of “When A Man Worships”.

Bishop Matthew L. Brown is a native of Buffalo, New York. He is an anointed teacher, exceptional administrator, author and gifted motivational speaker. In 2011, he was appointed as the Senior Pastor of Greater Community Church of God in Christ (GCC) in Marietta, GA where he reinvigorated the church and focused on “Bringing Kingdom to Community.”  Dr. Brown has committed his life to Servant Leader principles which he’s shared for over 30 years with diverse communities, faiths and business leaders. His commitment to providing a local distinctive service signature, which he aptly names Blue Water Ministry and Development, emanates from a deeply nourished conviction formed as he served underserved communities in his native Buffalo, New York. Dr. Brown motivates ministries, trains leaders, collaborates and partners with communities to achieve collective benefits for others.

Bakari Sellers is an attorney, CNN political commentator, and politician. He served in the South Carolina House of Representatives from 2006-2014 becoming the youngest African American elected official in the country at age 22. He vacated his seat in the South Carolina House of Representatives to run for Lieutenant Governor in 2014.  In 2020 he authored the New York Times Bestseller “My Vanishing Country” and began hosting the popular BAKARI SELLERS PODCAST.  Bakari Sellers currently head the Strorm Law firm’s Strategic Communication and Public Affairs team and recently added  it’s Diversity, Equity and Inclusion Consulting.

Pastor André D. Clark (affectionately known as “Shep” [short for Shepherd]) began his pastoral ministry at the age of 25. After the passing of his father, he was appointed Pastor of the First Missionary COGIC by Jurisdictional Prelate Glenwood H. Young, Sr. in March of 2003. In March of 2004, Bishop Young instructed Elder Clark to begin fellowship with Stairway to Heaven COGIC. The two churches held their first joint service on Resurrection Sunday 2004. Elder Clark was officially installed as Pastor on Saturday September 25, 2004.  Now almost twenty years later “Shep” is a nationally recognized preacher/teacher/leader of one of the fastest growing ministries (New Direction Christian Fellowship) in New York State despite the pandemic.  His ministries’ outreach programs have reached and changed the lives thousands in his community and beyond. “Shep” continues to network and form coalitions to meet the everyday needs of people.

Chris Hollins served as Harris County Clerk in Texas, during tumultuous 2020 elections. Hollins was responsible for administering the July runoff contest and the general election in November. Chris made history when he became both the youngest and first person of color to serve as Harris County Clerk, has come to embrace his central role on the frontlines of the battle for voting rights. Through the onslaught on Republican lawsuits, he and his team prevailed with a record number of individuals casting their vote.