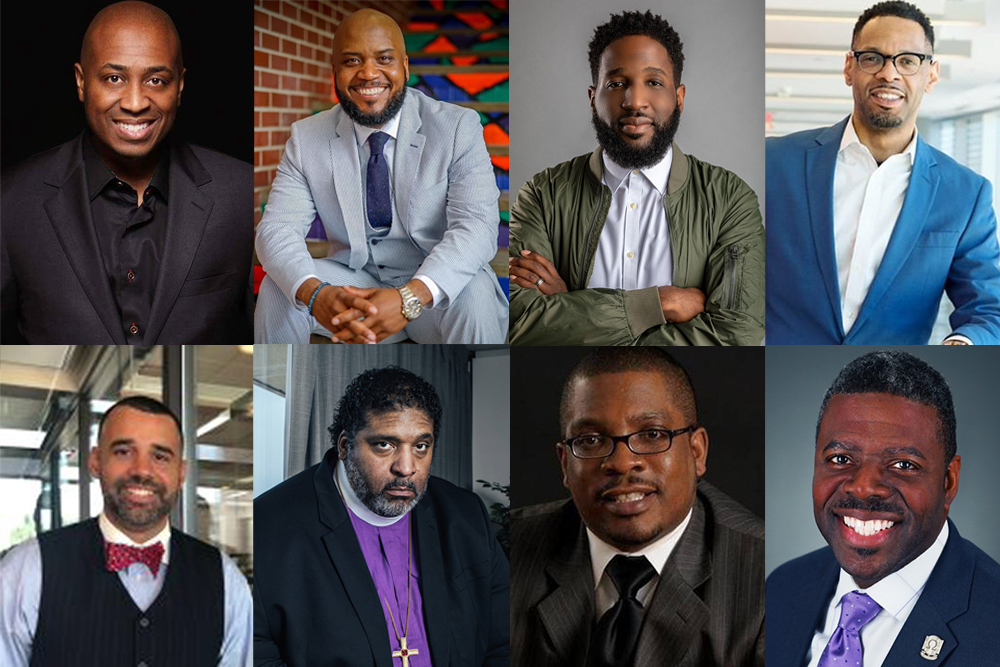 PK Kersey after working over 24 years for the government decided to form a nonprofit called That Suits You. TSU provides men with professional attire to help them get back to work and to HS seniors for prom and graduation. TSU not only provide suits/ties to men; they also provide workshops, trainings, etc. His passion is to help men get back on their feet. Many men have fallen on bad times and sometimes just need a helping hand to climb back on that ladder to success. PK is also an author, networker, speaker and panelist.

Kevin L. Booker, Jr. is the founder of Booker Empowerment, LLC (established in 2007) and has been an educator for 20 years. He is committed to uplifting and educating individuals. Kevin teaches college and high school level classes, trains men and women who have been sexually assaulted, facilitates leadership and diversity workshops, and lectures. He is a mentor and speaks publicly all over the country to encourage people to understand the power of education and using their voice to make positive change.  Booker is a City Councilor for the City of New London CT. He serves on the Board of Directors of the Anti-Defamation League (ADL) in Connecticut, ISAAC School Board of Directors in New London, CT, and Hartford Job Corps Academy Outreach Board in Hartford, CT. His motto is “Get comfortable with being uncomfortable.”

Ron Hill is  Vice President of Artist Development at RCA Inspiration. He oversees all A&R/Creative matters and the Partnership division for RCA Inspiration, Essential Sound, and Verity. Prior to joining RCA Inspiration, Hill was most President of Fo Yo Soul Entertainment, Kirk Franklin’s Dallas/Fort Worth-area company and Franklin’s manager for the past six years. The Dallas native began his career interning at Fo Yo Soul Entertainment in 2007, and began managing Franklin and became President of Fo Yo Soul in 2013, where his work has included A&R, music production, tour management, and other creative and business endeavors.

Moses T. Alexander Greene joins the Museum as director of film and performing arts. In this role Greene will set the NCMA’s music, dance, theater, and film seasons inside and outside the galleries, with a focus on creating diverse and remarkable experiences that foster belonging. He has 20 years of experience in communications, performing arts, artistic visioning, and multimedia production. Most recently Greene led the African American Cultural Center at North Carolina State University, primarily focusing on cultivating the critical examination and exploration of the richness of African diasporic cultures and history. Earlier he led communications and marketing at Saint Augustine’s University, managed national and regional large-scale events in Washington, D.C., and taught film, media, English, theater, and Africana studies on the college level. Greene holds two degrees from Syracuse University—a master’s in new media management and a dual bachelor’s in writing for television-radio-film and African American studies.

Dr. Shawn Anthony Robinson is a Senior Research Associate in Wisconsin’s Equity and Inclusion Laboratory (Wei LAB) at the University of Wisconsin-Madison, an author, a dyslexia consultant, and serves on the Board of Directors with the International Dyslexia Association. Robinson graduated from the University of Wisconsin Oshkosh with a Bachelors of Science in Human Services, a Master’s in Education from DePaul University, and a PhD in Language and Literacy from Cardinal Stritch University. Robinson is also a volunteer with Special Olympics, runs summer reading programs through the Boys and Girls Club.

The Rev. Dr. William J. Barber II is the President & Senior Lecturer of Repairers of the Breach, Co-Chair of the Poor People’s Campaign: A National Call For Moral Revival; Bishop with The Fellowship of Affirming Ministries; Visiting Professor at Union Theological Seminary; Pastor of Greenleaf Christian Church, Disciples of Christ in Goldsboro, North Carolina. Rev. Dr. Barber served as president of the North Carolina NAACP, the largest state conference in the South, from 2006-2017 and currently sits on the National NAACP Board of Directors. Rev. Dr. Barber is also the architect of the Moral Movement, which began with weekly Moral Monday protests at the North Carolina General Assembly in 2013 and recently relaunched again online in August 2020 under the banner of the Poor People’s Campaign. In 2018, Rev. Dr. Barber helped relaunch the Poor People’s Campaign, which was begun by Rev. Dr. Martin Luther King Jr. in 1968, starting with an historic wave of protests in state capitals and in Washington, D.C., calling for a moral agenda and a moral budget to address the five interlocking injustices of systemic racism, systemic poverty, the war economy and militarism, ecological devastation, and the false moral narrative of Christian nationalism.

Dr. Marco Clark is a well-respected educator, forward thinking innovator, exemplary author, polarizing public speaker, and veteran in the world of urban education. Dr. Clark currently serves as the Founder and Chief Executive Officer of the Richard Wright Public Charter Schools for Journalism and Media Arts in Washington, D.C. RWPC is the only public high schools in the District of Columbia or the surrounding area to offer journalism and media arts as a whole school concept, Richard Wright Public Charter Schools will also offer an academically challenging course of study in the content areas of math and science. In addition to his work as Founder and CEO, he is Chairman of “Man the Block,” an organization focused on providing safe passage for students to and from school.

Chesley McNeil is one of Atlanta’s most popular on-air personalities. He now greets viewers every weekday as the host of his own morning show on 11Alive, ‘Wake Up With Chesley’.  In addition to his career in television, Chesley has taught both undergraduate and graduate level Meteorology and Earth Sciences courses at several colleges and universities, currently teaching at Kennesaw University.  He has been awarded the prestigious American Meteorological Society Seal of Approval, is a Certified Broadcast Meteorologist and is the recipient of broadcasting Emmy Awards along with numerous professional awards and honors.  In his free time, he enjoys church, sports, and making documentaries.