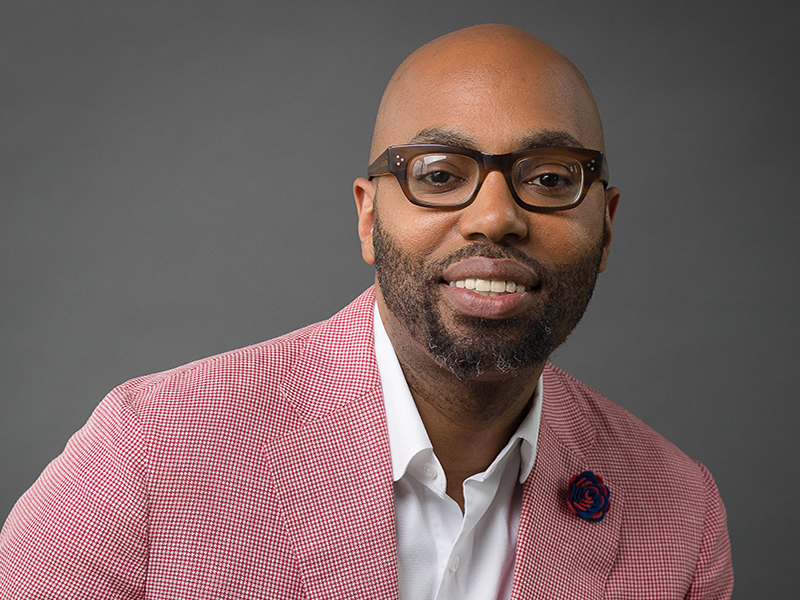 To Dr. Christopher Emdin, the charge as a Black man is clear: make oneself available to those with a good head on their shoulders, and a vision and heart for the people.

In his eyes, blackness is not individualistic – as in “you get yours, and I’ll get mine – but collectively, “we do our part” to ensure those in the Black community get access, wisdom, and knowledge from those willing to give it.

“That is the purpose [of my writing, teaching, and giving back,” said Emdin, an associate professor of science education at Teachers College, Columbia University, who recently accepted a post at the University of Southern California’s Rossier’s School of Education.

“I always try to do my work, my writing, my speaking to show that there is another way that I could be an academic, an intellectual, work in the Ivy league and pursue [things] and be a Columbian, go to Harvard. But, at the same time, to be connected to my hood, keep connected to my community, keeping connected to those that I see in our community who are doing good work, because if it was just about me and me alone, the work is not sustainable.”

Part of that work, says Emdin, is changing the systematic oppression baked into the educational system – that is, attaining accredited book knowledge at continuing academic pursuits at the expense of humanity and origin.

“The system of education for black and brown people, but black folks in particular,” he continued, “is built to ensure this observance, the feeling of loneliness and ‘less-than ‘ness’ and those of us who are successful in that system are supposed to forget where we came from in the pursuit of our academic knowledge. So, my work, my responsibility is to go back to those very same schools and reimagine the way they operate.”

In concert with that train of thought, according to a diverseeducation.com press release, Emdin’s cross-coastal move from New York to California will multi-level: not only will he hold the Robert A. Naslund Chair in Curriculum and Teaching as a tenured, full professor, but he will also be the inaugural director of youth engagement and community partnerships at the USC Race and Equity Center and lead the school’s teacher education program.

“If the system was built to deny [POC] our humanity, I go back to those schools to reimagine that purpose,” he added. “Now, some might hear what I am saying and say ‘well, this man don’t want us to get no degrees, this man doesn’t want our babies to get smart.’ It is the direct opposite. I am a firm believer in the pursuit of academic content.

“But I am trying to say, you can get the academic work, and still be who you are, and still connect to the community, and still help your own folks understand that you don’t have to divorce yourself from where you came from in order for you to be an intellect and academic. Too many in our communities think that success in schools comes from not being who you are. My work is to reimagine what that looks like.”

Emdin says his August, 2021 book, Ratchetdemic: Reimagining Academic Success (ISBN 978-0807089507) ties into his belief that authentic individuality and being academically inclined are not mutually exclusive concepts. One can be academic and intellectual, while, at the same time, what others may term “ratchet”: “from the community, a little loud, a little abrasive, a little expressive.”

“That expressiveness, that abrasiveness, and rawness does not mean that you are not an intellectual,” he said, “in fact, you should be able to do both and know where and when to activate each. For the better view of the community.0

“But [white and non-white people running schools] have taken [unfiltered talking from the heart and soul] and attached that to not being smart and not liking school. So, if you present to a young person and say, ‘Hey, listen, you could either be yourself or you could be academic,’ and being yourself is loud and expressive or being verbal or asking a lot of questions, and being academic is being quiet, and attentive, and only speaking when you are spoken to…the young person is going to say, I am going to choose to be myself and then you have controlled the mind of the young person to think if they are themselves, they are not being academic.”

This redefinition of individuality, said Emdin, causes the youth to disregard their individuality as not being an academic pursuit. His job then becomes convincing them to “see the genius in [their] ratchet” – able to be ratchet and with the potential to be academically successful at the same time.

The book’s main subject dovetails into deeper issues: education and pedagogy in the urban setting, race politics, gender-dominance in hiring practices, and economics in white suburbia. Emdin characterized POC’s being told their authentic selves are not smart leads teachers and educators, and thereby, the collective school system looking at genius as “a very white, standardized, middle-class way” – a false notion.