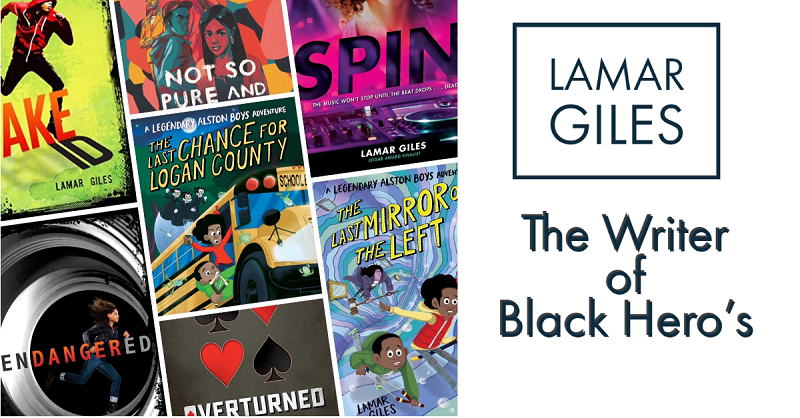 Lamar Giles is a well-published author and a founding member of We Need Diverse Books. His most recent novels include NOT SO PURE AND SIMPLE his first Contemporary Coming-of-Age Story (HarperTeen/HarperCollins) and Middle-Grade Fantasy THE LAST MIRROR ON THE LEFT (Versify/HMH), the sequel to his 2019 hit THE LAST LAST-DAY-OF-SUMMER. Lamar is a two-time Edgar Award finalist in the YA category, for his debut YA thriller FAKE ID (HarperCollins, 2014), and his second YA thriller, ENDANGERED (HarperCollins, 2015). His third and fourth YA thrillers, OVERTURNED (Scholastic, 2017) and SPIN (Scholastic, 2019), as well as his middle-grade debut THE LAST LAST-DAY-OF-SUMMER received glowing New York Times reviews, and was named to multiple Best Of lists, including Time Magazine, Kirkus Reviews, and Amazon. FAKE ID has been optioned by Sony Pictures.

Lamar is the editor of the We Need Diverse Books YA short story anthology FRESH INK (Random House, 2018), and a contributor to many YA and middle-grade anthologies including THREE SIDES OF A HEART (HarperCollins, 2017), BLACK ENOUGH: STORIES OF BEING YOUNG & BLACK IN AMERICA (HarperCollins / Balzer & Bray, 2019), THE HERO NEXT DOOR (Random House, 2019), HIS HIDEOUS HEART (Flatiron Books, 2019) and SUPER PUZZLETASTIC MYSTERIES (HarperCollins, 2020). He has published several short stories for adults.

Charles Clark: This is a record if I’m not mistaken, this makes, this interview right here, makes the 8th time that I have interviewed this brother. I am excited. Either for the radio or the magazine, actually for both. His name is Lamer Giles, he is an, how do I even know what adjective to put with this author, a fiction, either, I’m going to let him talk about himself, because you know I’m not going to do it. But listen he has a new book coming out and I’m going to let him talk about it. But I cannot believe that this is, I’m counting on, and before we did the interview, I begin to count 1 2 3 4 5 6 7, is this the 8th book that’s coming out right now, right?

Lamar Giles: Is it the 8th? I’ll have to do my own count Charles, you know.

Charles Clark: and then we have the last day.

Charles Clark: So pure and simple.

Lamar Giles: So pure and simple.

Charles Clark: And then the last mirror.

Charles Clark: And then this one.

Lamar Giles: And then this one, yes. Yes, so that’s it.

Charles Clark: This is a Nebo, brother mag, daily mix, this is like a glisten, this is epic right here. This is the 8th time that we have had conversations and I must say I thank you for your support.

Lamar Giles: Oh no, no thank you for having me so many times, I’m glad I haven’t exhausted my welcome.

Charles Clark: Absolutely not my brother. I just, listen I am. Let’s get with the interview. So, let’s start this. So, who is, just in case people don’t know, who is Lamar Giles?

Lamar Giles: Lamar is an author= whose been doing this professionally for almost 20 years. I started when I was in my very early 20s, with a short story sale. And have worked my way into writing young adult novels and middle-grade novels. My young adult mysteries have been received well, that’s Fake ID, Endangered, Overturned, and Spin. The middle-grade books, the Austin Boys Adventures, Last Last Day of summer, Last Mirror on the Left, and The Last Chance for Logan County, that’s coming out in October. And then my young adult, coming of age novel that I’m very proud of, not so pure and simple. I write black characters, I write black heroes, that’s pretty much what I dedicated myself to do, and I’ve been gratified to see people have connected with that mission.

Charles Clark: listen, I am so glad you write black people, let me tell you. This year I decided to go back to the beginning I am doing a freshman seminar class. Which I wasn’t supposed to do but we will talk about that later. I wanted to get them to reading. And so, I dug out my copies, that I have of fake ID. So, I have an entire class reading fake ID. When they opened, it still amazes me, that when they opened the back of the book and they saw your picture. I had some of my students, and so these were all freshmen, they were in shock that the author was a black male. And I said, what in the world, what’s wrong with you all? What have you all been reading? What’s going on here? And so, is that still the case, that our young people are still shocked that black men write books?

Lamar Giles: I think less so now. Because Fake ID, that came out in 2014, and even then, I think we were getting a little bit more headway with people like Kwame Alexander, Jason Reynolds. Two megastars who I’m happy to consider friends. I think we got Varian Johnson, we got Kwame Mbalia, Justin Reynolds now, BB Alston with his Amari, and the Night Brothers book, which has been huge. The Black Boy Joy anthology that Kwame Mbalia edited, that’s 17 of us in one book. So, I think there’s been a lot of progress made in that part of the representation. So, but I’m not surprised if your students are surprised because as we can see across the country right now, there are active battles to keep some of this stuff away from the children

Charles Clark: Exactly and so actually, I do have a copy. I went to the library, and I just happened to, I was looking for a specific type of book and I happened to see black boy joy on one of the shelves and so I grabbed it and of course, you’re in it, thank God. But to see all of those black male authors inside of one book representing us is such a fantastic thing. It’s one of the things that I am most proud of when I think of about Brother Magazine, that, it has been my passion and my joy to champion African American authors specifically black men. Because the young ladies, know about black women authors, they would mention them, they were mentioning Nick Stone and they were mentioning the young lady who wrote, it was a movie, I can’t think of it right now, but it will come back to me.

Lamar Giles: Is it Angie Thomas, Hate You Give?

Charles Clark: That’s the one, Angie Thomas. And they were, you know Jacqueline Woodson and they knew these authors. But they didn’t know anything about Jason Reynolds, or Kwame Alexander you know so I find this very interesting. So, it is my, I think it’s my passion to make sure that we understand that there are black male writers out here doing their thing. Such as Lamar Giles, doing his thing.

Charles Clark: What made you? Because the new book that’s coming out is middle grad. What made you, you dabble in everything; science fiction, I’m pretty sure you’ve got an adult book coming out pretty soon and I will get that and I’ll buy that. What made the transition, why middle grade? Because you are doing well with the young adult, and I said great this is great. But now you have middle-grade and so what made you dwell into that arena or that genre right now?

Lamar Giles: Well two things. I mean to be 100% honest, middle-grade books are the books I fell in love with, to begin with when I was that age, you know. It’s not like I ever lost the love for the fiction catering to that age, the thing I never loved about it was I didn’t see anybody in it that looked like me.

Lamar Giles: So, all the sources of adventure that those books would take me on is still like, hey I don’t really think this kid looks like me or the kids in my neighborhood and where are those books?

Lamar Giles: With that in mind I was given the opportunity. It was Kwame Alexander himself when shortly after he won the Newbery medal, the highest honor in children’s fiction, back in 2017, he started his own imprint. He was recruiting people to write for him, and he tells me I’m the first person he calls, and I believe him. We’ve been friends for a long time he said Hey if you are interested in doing any middle grade, tell me what you got in mind and maybe we can get together, and you can be part of the imprint. Given that opportunity is when I first created the Austin Boys in the Last Day of summer. Had a ton of fun writing it, it was received well enough to lead to 2 more books in that series.

Lamar Giles: As long as possible. However, I’m taking a break from the boys for a second, because we’ve done 3 books and if you’ve read the first book you might remember they had rivals, known as the Epic Ellison twins. That’s Wiki and Leen there are two little black girls, geniuses. One is really into building stuff, one has a photographic memory. We’re spinning them off into their own series. I’m working on the first book in their series now. Honestly, I always said, I told Kwame this back in the day, I built this world to be scalable. In my mind, it could go on forever, as long as I have the energy to do it. I built it in mind thinking about cartoons I enjoyed growing up, particularly Duck Tales. I think the world could build-out to be as big as the world of Duck Tales, whether that’s the town of Duckburg or everywhere Scrooge, Dewey, Huey, Louie launchpad and then went beyond that. That’s the sort of reach I want to have for this series.

Charles Clark: Listen I would watch it too, I can’t wait. Listen I’m through with you. Listen I’ve got to take a break, but before we take a quick break what is the genesis of you, how do I ask this. Because I want to ask it right. So, because you write in many different grade levels and genres, do you have a favorite?

Lamar Giles: it’s an interesting question, I mean it,  ……… Part 2 Next Month

Previous 6 Ways to Make Sure You NEVER Get Rich by Mark Anthony McCray
Next THE KING HOLIDAY AND VOTING RIGHTS  by Dr. Anthony Neal