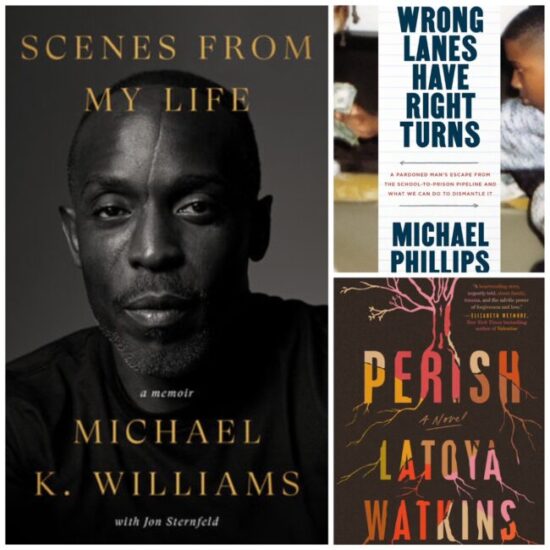 Scenes from My Life: A Memoir by Michael K. Williams

A moving, unflinching memoir of hard-won success, struggles with addiction, and a lifelong mission to give back—from the late iconic actor beloved for his roles in The Wire, Boardwalk Empire, and Lovecraft Country

When Michael K. Williams died on September 6, 2021, he left behind a career as one of the most electrifying actors of his generation. From his star turn as Omar Little in The Wire to Chalky White in Boardwalk Empire to Emmy-nominated roles in HBO’s The Night Of and Lovecraft Country, Williams inhabited a slew of indelible roles that he portrayed with a rawness and vulnerability that leapt off the screen. Beyond the nominations and acclaim, Williams played characters who connected, whose humanity couldn’t be denied, and whose stories were too often left out of the main narrative.

At the time of his death, Williams had nearly finished a memoir that tells the story of his past while looking to the future, a book that merges his life and his life’s work. Mike, as his friends knew him, was so much more than an actor. In Scenes from My Life, he traces his life in whole, from his childhood in East Flatbush and his early years as a dancer to his battles with addiction and the bar fight that left his face with his distinguishing scar. He was a committed Brooklyn resident and activist who dedicated his life to working with social justice organizations and his community, especially in helping at-risk youth find their voice and carve out their future. Williams worked to keep the spotlight on those he fought for and with, whom he believed in with his whole heart.

Imbued with poignance and raw honesty, Scenes from My Life is the story of a performer who gave his all to everything he did—in his own voice, in his own words, as only he could.

Wrong Lanes Have Right Turns: A Pardoned Man’s Escape from the School-to-Prison Pipeline and What We Can Do to Dismantle It by Michael Phillips

The unforgettable true story of one man’s escape from the school-to-prison pipeline, how he reinvented himself as a pastor and education reform advocate, and what his journey can teach us about turning the collateral damage in the lives of our youth into hope.

“A heart-wrenching and triumphant story that will change lives.” (Bishop T. D. Jakes)

Michael Phillips would never become anything. At least, that’s what he was told. It seemed like everyone was waiting for him to just fall through the cracks. After losing his father, suffering a life-altering car accident, and losing his college scholarship, Michael turned to selling drugs to make ends meet. But when his house was raided, he was arrested and thrown into a living nightmare.

When it looked like he would be sentenced to spend years behind bars, the judge gave him a choice – go to a special college program for adjudicated youth or face the possibility of a 30-year prison sentence. It wasn’t hard to pick. From that choice, a mission was born – to help change the system that shuffles so many young Black men like Michael straight from school to prison. Today, Michael is the pastor of a thriving church, a local leader in Baltimore, and a member of the Maryland State Board of Education. He discovered that education was the path to becoming who he was created to be.

Armed with research, statistics, and his powerful story, Michael tackles the embedded privilege of the education system and introduces ideas for change that could level the playing field and reduce negative impacts on vulnerable youth. He explores ways in which the listeners can help advocate and provide resources for students, and points us to the one thing anyone can start doing, no matter who we are or what our role is: speak into young kids’ lives. Tell them of their inherent worth and purpose.

In this inspiring, thought-provoking, and energizing call to action, Michael’s practical steps provide a way forward to anyone wanting to help create space for collateral hope in the lives of for young people around them.

Perish A Novel by Latoya Watkins

From a stunning new voice comes a powerful debut novel, Perish, about a Black Texan family, exploring the effects of inherited trauma and intergenerational violence as the family comes together to say goodbye to their matriarch on her deathbed.

Bear it or perish yourself. Those are the words Helen Jean hears that fateful night in her cousin’s outhouse that change the trajectory of her life.

Spanning decades, Perish tracks the choices Helen Jean—the matriarch of the Turner family—makes and the way those choices have rippled across generations, from her children to her grandchildren and beyond.

Told in alternating chapters, Perish follows four members of the Turner family: Julie B., a woman who regrets her wasted youth and the time spent under Helen Jean’s thumb; Alex, a police officer grappling with a dark and twisted past; Jan, a mother of two who yearns to go to school and leave Jerusalem, Texas, and all of its trauma behind for good; and Lydia, a woman whose marriage is falling apart because her body can’t seem to stay pregnant, as they’re called home to say goodbye to their mother and grandmother.

This family’s “reunion” unearths long-kept secrets and forces each member to ask themselves important questions about who is deserving of forgiveness and who bears the cross of blame.

Set in vividly drawn Texas and tackling themes like trauma, legacy, faith, home, class, race, and more, this beautiful yet heart heart-wrenching novel will appeal to anyone who is interested in the intricacies of family and the ways bonds can be made, maintained, or irrevocably broken.

Previous BOOK OF THE MONTH | AUGUST/SEPTEMBER 2022 – Part 1
Next Managing Our Emotions by Joyce A. Terry