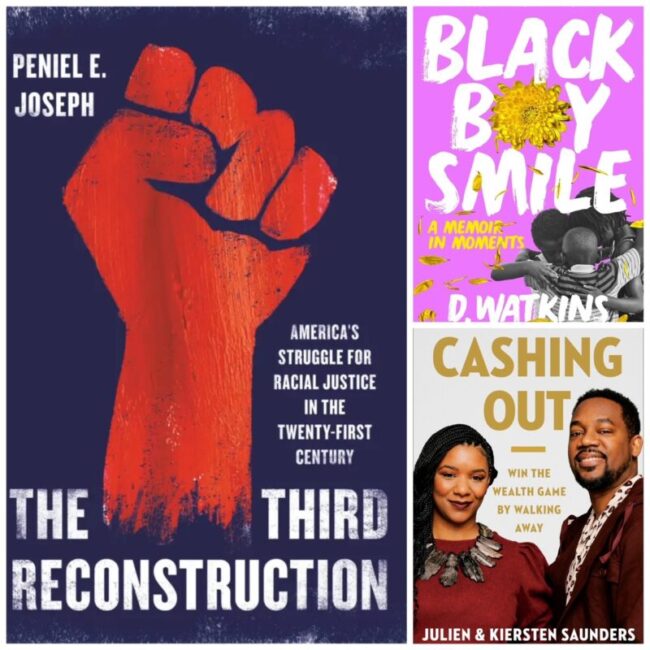 We could not decide on just ONE.  So we picked SIX ….. here are the first THREE.
The Third Reconstruction: America’s Struggle for Racial Justice in the Twenty-First Century by Peniel E. Joseph

One of our preeminent historians of race and democracy argues that the period since 2008 has marked nothing less than America’s Third Reconstruction.

In The Third Reconstruction, distinguished historian Peniel E. Joseph offers a powerful and personal new interpretation of recent history. The racial reckoning that unfolded in 2020, he argues, marked the climax of a Third Reconstruction: a new struggle for citizenship and dignity for Black Americans, just as momentous as the movements that arose after the Civil War and during the civil rights era. Joseph draws revealing connections and insights across centuries as he traces this Third Reconstruction from the election of Barack Obama to the rise of Black Lives Matter to the failed assault on the Capitol.

America’s first and second Reconstructions fell tragically short of their grand aims. Our Third Reconstruction offers a new chance to achieve Black dignity and citizenship at last—an opportunity to choose hope over fear.

Black Boy Smile: A Memoir in Moments by D. Watkins

At nine years old, D. Watkins has three concerns in life: picking his dad’s Lotto numbers, keeping his Nikes free of creases, and being a man. Directly in his periphery is east Baltimore, a poverty-stricken city battling the height of the crack epidemic just hours from the nation’s capital. Watkins, like many boys around him, is thrust out of childhood and into a world where manhood means surviving by slinging crack on street corners and finding oneself on the right side of pistols. For 30 years, Watkins is forced to safeguard every moment of joy he experiences or risk losing himself entirely. Now, for the first time, Watkins harnesses these moments to tell the story of how he matured into the D. Watkins we know today—beloved author, college professor, editor-at-large of Salon.com, and devoted husband and father.

Black Boy Smile lays bare Watkins’ relationship with his father and his brotherhood with the boys around him. He shares candid recollections of early assaults on his body and mind and reveals how he coped using stoic silence disguised as manhood. His harrowing pursuit of redemption, written in his signature street style, pinpoints how generational hardship, left raw and unnurtured, breeds toxic masculinity. Watkins discovers a love for books, is admitted to two graduate programs, meets with his future wife, an attorney—and finds true freedom in fatherhood.

Equally moving and liberating, Black Boy Smile is D. Watkins’ love letter to Black boys in concrete cities, a daring testimony that brings to life the contradictions, fears, and hopes of boys hurdling headfirst into adulthood. Black Boy Smile is a story proving that when we acknowledge the fallacies of our past, we can uncover the path toward self-discovery. Black Boy Smile is the story of a Black boy who healed.

Cashing Out: Win the Wealth Game by Walking Away by Julien & Kiersten Saunders

A revolutionary financial and career path to break free from corporate America’s grasp, make peace with your finances, and build wealth on your own terms

When it comes to our finances, we’re told to follow the same script as our white colleagues: work hard, make money, save, and invest. Yet despite putting in twice the effort, you end up making less and are routinely passed up for career opportunities. Here’s the truth: financial freedom is within your reach, but playing by corporate America’s rules will only take you halfway there. To win, you must eventually walk away—and take up an entirely different model of wealth accumulation.

Cashing Out is your roadmap to financial freedom despite the broken system. You don’t have to sacrifice your time and mental health to maximize income. Instead, financial experts Julien and Kiersten Saunders show how to design a life that allows you to enjoy the little things now while setting yourself up for future financial security. Drawing from their journey paying off $200,000 of debt in five years, quitting their high-stress corporate jobs, and retaking control of their finances, this book will teach you:

It’s time to stop being a cog in the machine that leaves you under-appreciated and underpaid. Cashing Out shows you how to open the door to a new kind of prosperity.