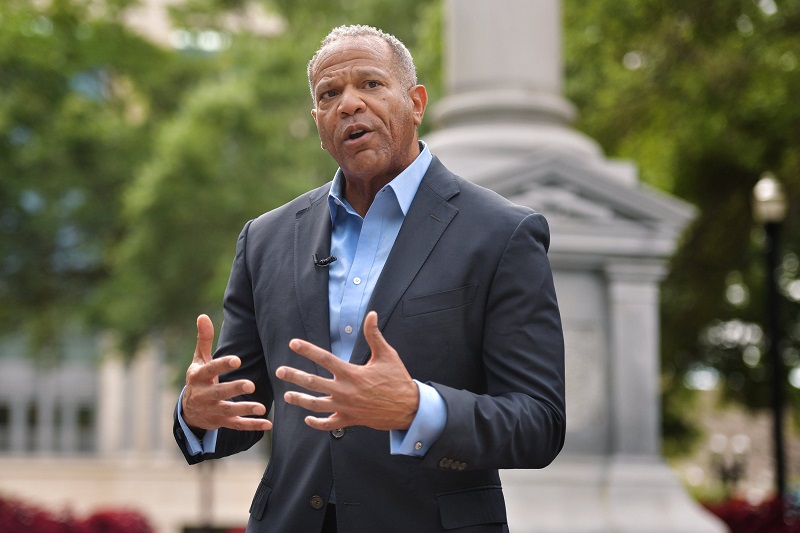 Earl Johnson Jr: These facts are just not known to Americans.

Charles Clark: Let’s stop right there, let’s take a quick break and we will be right back alright. Don’t go anywhere. Hey, welcome back to the daily mix, this is Charles Clark and I have the pleasure of talking to, I was about to call you doctor.

Earl Johnson Jr: Well, that is what they call me at school. Dr. Johnson, feel free.

Charles Clark: Yes sir, so Earl, Earl Johnson Jr, we talk about monuments and both of the questions I have while you were… during the last segment. I could hear people thinking and talking in my head right now saying why is this so important? You have created a whole organization, taking down why this is so important other than police reform and criminal justice reform. We had the George Floyd act, we have this going on, I mean, and we have a lot going on. Why is this something that we should be concerned about?

Earl Johnson Jr: Which is a great question and now Charles, this is certainly not in exclusion of any other civil justice effort in America, and I am generally a racial justice advocate. But I have chosen this one issue because it is very clear cut: You have monuments to racist traitors. By the way, don’t forget this is an organization, a confederacy that was born in treason.

Earl Johnson Jr: Took up arms against our country. We are the only country in the world that I am aware of, by the way, that has monuments of enemy combatants on public land. This is the one issue where you either see it, it is either on the courthouse steps, this monument to the confederacy as to why black and brown people walk into this monument of white supremacy. It will either be on the courthouse steps or it will not be on the courthouse steps and so to me, the finiteness of this mission that is a certain number of these monuments and tributes, and everyone has been catalogued wonderfully actually by the southern poverty law center and we have leaned on them heavily and so, we can knock them off. One by one, this is a grassroots approach, by definition, it is a local rule issue.

Earl Johnson Jr: So, Galveston, for example, has 3 judges that decide what happens to the monument there at the courthouse. Here in Jacksonville Florida, we have a strong mayor form of government. He took down one monument and now says he somehow doesn’t have the authority to take down others and so it really depends on where you are as to who the decision makers will be.

Earl Johnson Jr: But ultimately, under any circumstance, it has to be a local decision unless congress passes any law that would outlaw federal funding to confederate monuments and so, that certainly brings me to the federal lawsuit that I filed per say against the mayor of Jacksonville and the governor of Florida, asking the court to stop them from spending taxpayer money on confederate monuments on public land. So, that has been filed up here, and it is pending right now. I have alleged that the use of those dollars is a violation of the 13th amendment that outlaws slavery. Now, the 13th amendment does more than that, it outlaws slavery but it also outlaws the passages of slavery. What is more of a message of slavery than an organisation founded upon slavery? The confederacy. So, we hope that we will get an order that will end this federal funding or see that the funding by local mayors and governors, local governments using tax-payer money to pay for and upkeep, money that allures to the benefit of these confederate monuments.

Charles Clark: So, I saw something yesterday. I use Facebook recreationally of course, but for some reason you couldn’t get on Facebook for a while yesterday so it must not have been yesterday. It had to have been on Sunday, or one day this week, but there was a teacher who showed a textbook from Texas, talking about the civil war. It was very complimentary. It didn’t use the proper language to let you know that it was more than a disagreement between the North and the South. It was more than just that. How about that?

Charles Clark: Brothers and sisters, we have problems.

Earl Johnson Jr: This is all part of the…

Charles Clark: Okay but is that one of the reasons for taking the monuments down because along with the textbooks, if the monuments are still up, it still gives it, it almost gives it validation, that train of thought.

Earl Johnson Jr: Well, you have nailed it. They go hand in hand Charles, and this is all part of the conservative effort that is now 150 years old called the Lost Cause movement. The Lost Cause movement began in the South by leaders in the South who, before the end of the civil war, when they realized they were going to lose, wanted to try and bring out a positive spin on the confederacy. So, they put a lot of untruths out there of how benign of an organization it was and how nice they were to black people and how this civil war, which was treason, I mean Benedict Arnold style right? How this civil war was just a misunderstanding against some good old boys and nothing for you to worry about. That, coupled with the textbooks which are all over the place right, in the South and beyond which totally whitewashed what slavery was to Blacks. The millions who did not survive the voyage here from the motherland, much less the millions that we know were murdered over the last 400 years. Not knowing the true history of that and then not even understanding what really transpired after, reconstruction after the North left and these white supremacy laws, people referred to them as Jim Crow. I don’t know what that means at all honestly. They are white supremacy laws if you want my honest thoughts on it.  These white supremacy laws were in place for 100 years. So, literally from the 1870s till the 1970s, Blacks couldn’t go to certain schools, couldn’t live in certain places. It just went on and on and on.

Charles Clark: This is the great part of this conversation right here because you still have certain visages of that still going on. Blacks still can’t live in certain places.

Charles Clark: So, you still have, I mean that book that I bought a couple of years ago. So, there are still little pieces that we are still in a confederate space… I said this yesterday.

Earl Johnson Jr: Everything is still in place and so nothing really has changed. The prorogation of the lie of what the confederacy was, with violence, mass violence against innocent peaceful Black Americans, has been under the plane of how in the criminal system, we are clearly out sentenced versus our white counterparts. Every time we are facing adversity based upon race, yet there are many in our society who absolutely reject the notion of racism even exists. So, there is much work to do in every corner, and I have just tried to carve out my little corner. Call me guilty, but I am out here swinging like windmills trying to get these obscene monuments off public land.

Charles Clark: Wow. Listen, before we go, because our time is winding up and you have so much pertinent information, I just want the lawyer in you to find this funny. I need to get your opinion on this. So, Alabama has decided to use the funds that they got from the federal government to build more prisons. So, I can’t let you go without getting your thoughts on this… I know you don’t, as they say, you don’t lawyer anymore.

Earl Johnson Jr: Yeah but you know Charles, there is all brother, it all is connected. When you read the 13th amendment which outlaws slavery, there is a little caveat in there, I don’t know if you saw that. Yeah but…

Charles Clark: 13 documentaries sure did help us out, figure that caveat didn’t it.

Earl Johnson Jr: Yeah, that caveat about going to jail and so once we begin the conversation of the criminal justice system in America, and making it a for profit motive system, which it is, at every level.

Earl Johnson Jr: At every level, coupling that with the institutional system, racism, we haven’t even got to how the place emerged. We understand, most of us now anyways, about black code laws right after the end of slavery and the deputation if you will of these private law enforcement. So, even the notion of policing in America, beginning with the enforcement of outdated slave laws against black people, is just a stain that we refuse to even regret.

Charles Clark: Exactly, I am going to let you go, I mean I could talk to you forever.

Charles Clark: We are going to do this on the regular you and I.

Earl Johnson Jr: I am ready.

Charles Clark: Because, I have a lot more questions and I think you could be our legal commentator for Brother Magazine. So, we will talk a lot.

Earl Johnson Jr: It will be fun.

Earl Johnson Jr: It has been my honor man, been brother to brother.

Charles Clark: Thank you so much, I really appreciate you. Listen, tell the people how to stay in touch with you.

Earl Johnson Jr: Excellent, thank you very much. So, you can find us at takeitdownnow.org, takeitdownnow.org. I am on you know all the social platforms at takeitdown or takeitdown.org, you will find me on twitter and also Facebook Earl Johnson. So, check us out. We are keeping you updated with what is happening right now with the fight to remove confederate monuments from public land. We are keeping the pressure on in a variety of fronts. We are highlighting folks who are out front. Also, just one thing, Charles we have a production agreement in the works to do a documentary on the work that we are doing. So, it may be that soon we will have a documentary that takes really a deep dive into this effort.

Charles Clark: That is fantastic. I appreciate you so much my brother and Thank you.